I have the best friends in the world….FACT!

It’s just over a year since Team HALO moved into this house. It’s a rental property and in the most amazing location for nearby schools and town, so the fact that it had been lying empty for a long time and was immediately available indicates how much of a state it was in. It was filthy and hideous but the three of us were pretty desperate. We had shared a bed at my parents’ house for 2 months and although they saw it as an adventure, I was adamant that Lola would have stability as she started her last term of reception at school.

Anyway, when I saw the house…..the only immediately available house in the area within budget, it was the first time I have ever publicly had to ask for help. I felt humiliated and defeated to have to ask people to take part in my very own DIY SOS but I swallowed a heap of pride and remembered who I was doing this for…the kids. Upon reflection, asking for help was one of best things I have ever done.

I remember staring at this haunted looking house which hadn’t seen any TLC for years. It’s strange because as horrendous as it was, it had a lovely feel to it when I looked around. The estate agent looked embarrassed as he showed me the dilapidated rooms and I swear that when I asked to arrange a second viewing he must have thought I was high! As crazy as it was, I could strangely see past the tea towels for blinds (I kid you not) and broken beds and truly believed we could make it a happy home.

One thing I knew is that there is no way the children were sleeping here until it had been gutted. I needed to call in the troops for assistance. I went on to Facebook, plucked up the courage and posted a message asking anyone who was free that weekend to come and help. They would be rewarded with tea, biscuits and a warm, fuzzy feeling knowing they were helping someone in need. To say I was overwhelmed at the response is an understatement. I was expecting a couple of half-hearted responses but if I had accepted every offer of help then I think we could have renovated the entire estate never mind one house. You really do find out who your friends are….people I’ve know since childhood and people who I’d only met in the previous year offering a helping hand. It was such a humbling experience and I’ll always be eternally grateful to everyone who offered to help out that weekend. When Lola and Harry arrived they had no idea of the blood, sweat and tears which had gone into this 48 hour makeover and that’s just how I wanted it!

One year on and yesterday we were lucky with the weather and celebrated Harry’s 4th birthday with a little party in the garden. A few of the people who helped last year were here. The children were playing with their friends, laughing and running around in their own little wonderland. It was one of the best days I have ever had as Team HALO. We were surrounded by love, laughter and happiness. It just goes to show, it doesn’t matter where we live, renting or owning, home really is where the heart is and our hearts are most definitely in this little corner of paradise. It might never be ours on paper, but it is home and when we open our doors and welcome people in to our magical world, they become part of the happiness.

Looking on at what we’ve achieved with the love and help of these people made me proud and emotional yesterday. I don’t have any brothers nor sisters but I am part of a close family of friends who I couldn’t live without. Ross, Chandler, Monica and the rest of them have nothing on us.

So after a rollercoaster of a week, I’m ending it with happy kids asleep in bed, full of memories and cake….lots of cake. Who could ask for anything more? 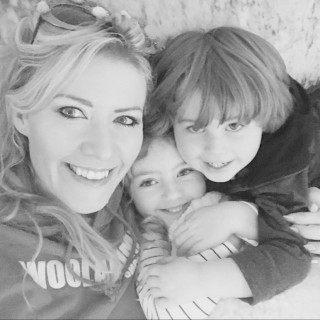